Your iPhone is About to Get a Major Makeover 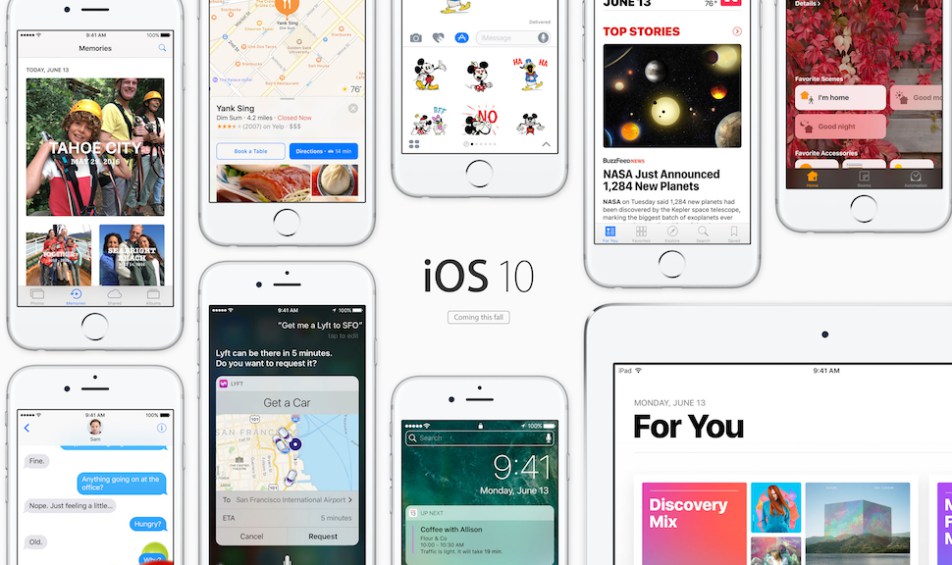 ICYMI: Apple’s Worldwide Developer Conference was this Monday, and with it came some major announcements.

A new Apple TV remote app for iPhone, a major overhaul to the Apple Watch’s command center, and Siri coming to Mac are just a few notable updates.
But perhaps the biggest announcement and the one receiving the most buzz is the fall release of iOS 10 and the slew of updates it will bring.
We’ve done the research so you don’t have to and have outlined a few major updates to the iPhone’s iOS that we simply cannot wait for below.

1. “Raise to Wake”
As the name suggests, Apple’s new “Raise to Wake” feature will wake your phone when you pick it up, so you can view your lock screen and any new messages or notifications in a flash. Speaking of, your notifications will soon don a whole new look. Plus, if you have an iPhone with 3D Touch capability, you will soon be able to respond to and interact with the apps sending you notifications instantly. According to The Verge, this is all in attempts to compete with what Google has already started doing for Android.

3. Music and Maps will get much needed overhauls.
It’s no secret that Apple Maps isn’t exactly the average iPhone user’s preferred navigation app. Apple hopes to change this with its all-new design. Eddy Cue, Apple’s senior vice president of Internet Software and Services, claims the new Maps will be “a lot more proactive,” meaning more predictive features will soon be added. A refreshed UI will have a cleaner look and provide users with extensive traffic information. Similar to traffic app Waze, Maps will soon note when a large amount of traffic lies ahead and offer you alternate routes, noting how much time suggested shortcuts will take.

Apple Music, too, is getting a fresh new “redesign from the ground up.” Cue claims the updated interface will make music king. The updated UI will be easier to navigate and more intuitive, providing users with an overall better UX.

4. Updates to the Phone app… You know, that thing you sometimes use only to call your mom?
Although you may not use your iPhone as an actual… well, phone… too often, there are a couple of exciting changes coming to the Phone app. With iOS 10 will come voicemail transcriptions, meaning you will soon be able to read your voicemails without having to listen to them. This could be handy if you receive a voicemail while in a meeting or if you’re on another call, as you will be able to read your voicemail message so you can determine its level of importance before taking any action to respond. Perhaps even more useful will be the fact that your phone will soon have the ability to detect when an unknown caller is potentially phone spam. Your phone will label the incoming call as such so you can ignore it without worry.

5. Apple’s stock apps will be removable.
You read that right. With the release of iOS 10 this fall, you will finally be able to delete that pesky Watch app from your iPhone that you will never use because you can’t imagine spending $999 on a watch. And that Stocks app that you never remember or care to check? It will no longer be forced to take up storage space on your device. Soon your home screen won’t feel so cluttered with apps you know you will never use. Those “handy” Tips? A thing of the past. That yellow eyesore will soon lie dormant in your iCloud grave of unwanted app downloads.

6. Messages are getting downright interactive.
The most frequently used iOS app is getting some rich new additions with the impending system update. “Bubble effects” will allow you to send your message with an animated chat bubble, because sometimes it’s just not what you say, but how you say it that matters. “Invisible ink” will allow you to send a message or photo that remains hidden until the recipient swipes to reveal it. (What you use this feature for is up to your discretion.) “Stickers” are exactly what they sound like, and will operate similarly to Facebook Messenger’s Stickers, allowing users to send small cartoon pictures with their messages. You will also have the ability to add a personal touch to your texts by sending a message in your own handwriting. See all these new features in action over at Apple’s website.

Although this year’s WWDC brought about several exciting announcements, we are most excited for the complete overhaul our phones will soon be getting. We almost can’t wait to reconnect with those friends we always forget to text back just so we can send them a sticker to say sorry.

And just in case you prefer the TL;DR (that’s “too long; didn’t read” for you all non-Redditors) version of this blog post, here’s Apple’s newest iOS promo video for a quick preview of some of the changes to come: