Facebook continues to conquer the world of social media, one hashtag at a time!

Even when we all thought Facebook couldn’t possibility get any better, or add any special features to get us as followers even more entranced and involved, they have now added hashtags to their platform. The Facebook hashtags, announced last night, are being added to enhance Facebook’s conversational ability, and to provide, “a simple way to see the larger view of what’s happening or what people are talking about,” according to Facebook product manager Greg Lindley.

Facebook isn’t stopping with just hashtags though, these hashtags are just the first addition to a series of features that well help enhance online conversation. The hashtags will work virtually the same as the version seen on Twitter. Individuals can hashtag, click on other user’s hashtags in posts, and see a feed of other posts from other pages and people who use the same conversation marker.

Just one tip! Facebook’s hashtags are included under their privacy policy, so before you hashtag make sure that your privacy settings will allow people to actually see your posts! 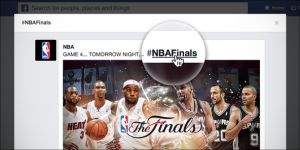 Look out for your chance to use the Facebook hashtag service!