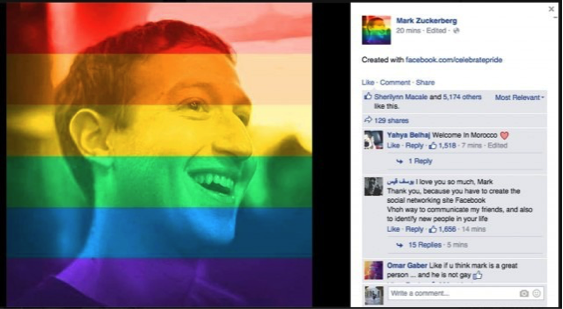 Well, they’ve done it again. As per usual, Facebook is ahead of the curve in both technology and giving its users what they want. As of September 30, users can add a GIF as their profile picture. Wanting to give Facebook fans more control of their online persona, the social media titan has also launched a new filter for profile pictures. This summer, 26 million users used the ‘Celebrate Pride’ filter rejoicing in the Supreme Court Same Sex Marriage Ruling.

In addition to the updated profile features is a new pop-up feature that will live alongside the staple “like” button. Facebook has unveiled the “love,” “laughter,” “happiness,” “shock,” “sadness,” and “anger” buttons. Currently, these buttons are only available in Ireland and Spain, but Facebook is seeking to expand this market by the end of the year.

Show your followers, friends, and network that you are on board with these progressive changes! Add a filter or GIF to your profile picture, “love” it when your friend gets engaged, and, as always, have fun with your social media!