In the world of social media, do blind dates even exist anymore?

In light of last night’s bachelorette finale part one, I was intrigued by Mashable.com’s article stating that one in every four people friend requests a potential date before ever actually dating them! I know I am also a victim to the Facebook craze, and that I too tend to friend people who I have only met or spoken to once. But,when it comes to romance, does Facebook tend to ruin your odds or enhance your chances?

On one hand, it could be seen as a deterrent because it allows for a certain level of scrutiny and visual judgement. Usually, when it comes to personal Facebook accounts, people are only interested in one thing- appearances.

However, Facebook can also give you a sense of an individual’s personality, what their friends are like, and what he or she enjoys doing with their free time.

So… Facebook first and date later? I am still on the fence about this notion, but in today’s day and age it is nearly impossible to ignore the temptation of social media. If used correctly I believe Facebook can be helpful and insightful, just keep an open mind, and be sure to look past just the profile picture!

Check the image below, featured on Mashable.com, to view some statistics on when people think its’ appropriate to Facebook your crush. What is your opinion? 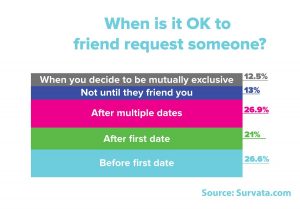