Posted at 5th-Sep-2013 in Uncategorized | Leave a reply

I’ve never run more than a few miles at a time. I’ve never taken a cross-country trip. I’ve never been a member of a relay team. And, up until six months ago, I had never even heard of Ultra-Running.

On April 15, 2013, Ashley Kumlien embarked on a 3,000-mile journey across the United States – for the second time. Her challenge: lead a relay team from Los Angeles to New York to raise money for Multiple Sclerosis in honor of her mom, Jill Kumlien. Back in 2010, she had this crazy idea that she could raise awareness for a cause by running a marathon each day (day after day after day) until she had run across the country. In doing so, she became the 16th runner every to run across the country. This year, Ashley and her non-profit, MS Run the US, weren’t alone. They were accompanied by a relay team of runners, a few incredible sponsors and a community of support.

Enter Socialfly. We specialize in social media marketing for a variety of clients, but this is our first non-profit. Our challenge: Garner support and rally behind a team to raise awareness for Multiple Sclerosis and the relay itself. They talk about the lonely life of the long distance runner. Pounding the pavement, the trails and the hills, the members of the 2013 MS Run the US relay team ran for reasons of their own. From runners who have MS themselves, to people running for someone special in their lives, to extreme athletes with the desire to be a part of something huge, they took off from the grind of their daily lives and went out on the road for a week long series of marathons – to be run individually. This brings me back to the community of support. There were TV cameras at the start line and there will undoubtedly be more at the big finish. There were some local news stories and articles featuring their hometown heroes. But, for day-to-day support, there was the incredible outpouring of love, support, donations and excitement on social media. Check out their Facebook page, their Twitter feed and their Instagram. It’s like looking at a scrapbook of real-time updates, funny snapshots, inspiring words and visual recaps of each segment. Social media is at its best when it tells a complete story, and I am proud to say that I got to play a small part in telling the story of this incredible relay. 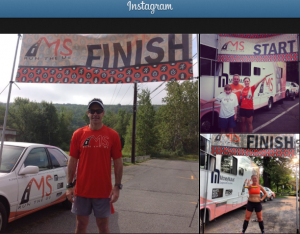 Thousands of people followed the runners in their segments. Tomorrow morning a crowd will gather to cheer on the finish and congratulate the runners on a job well done, but it will be far from the first time. Family, friends and complete strangers have been sending their congratulations, their support and their donations for six months. It doesn’t take a lot to understand why this organization has stirred such emotion. Ashley is a girl who loves her mom, watched her battle Multiple Sclerosis since 1980 and decided to do something (huge understatement) to help. Gratitude, awe and curiosity will continue to drive the outpouring of support and I have no doubt that the 2014 MS Run the US relay will be even bigger.

I’ve still never run a marathon and I’ve never gone on a cross-country expedition. But, tomorrow, Socialfly will gather at Pier 40 in NYC and witness the culmination of the inaugural MS Run the US Relay – which is fitting because I’ve been “Following,” “Liking,” and “Sharing” in their success every mile of the way.

The finish will be held at 10:15 a.m. on Friday September 5 at Pier 40 in NYC. There will be a celebration at Toshi’s Living Room and Penthouse at 6:30 p.m. that night! To get tickets, click here: https://msruntheusnewyork.eventbrite.com!