So… what exactly is a “Cronut”? If you don’t know what it is, you will definitely be confused, but if you DO know what it is, then you will share my excitement or feel jealous of my delicious victory. Once Dominique Ansel, owner of Dominique Ansel bakery and creator of the Cronut, unleashed his delicious masterpiece, its’ popularity has only continued to skyrocket! The Cronut is a mysterious and flakey cross between a doughnut and a croissant, and trust me it is anything but ordinary.

If you want even a chance at securing Cronuts, only two, (as that is the limit per customer!) you absolutely have to arrive at the bakery before 6:45am! We thought we were playing it safe by staking our spot in line by 6:15 and we were already the 60th and 61st customers waiting for our chance to try the infamous treat. Why the tremendous line and soaring demand? The bakery only produces a couple hundred a day! 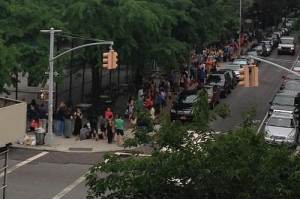 Here at the Socialfly office we were well aware of this Cronut craze, so when we were sent on an intern mission to secure the delectable and crazed treats we were both excited and anxious. With our mouths watering we boarded a 5:30 AM subway and made our way down to the back. The look of hunger, nerves, and sleep in the eyes of our peers only furthered our anticipation.

As we sat in line we began to listen to the stories of the customers around us. The fellow interns securing Cronuts for their companies, the out-of-state individuals who heard about the bakery from across state lines, and even the return customer who could not seem to get enough of Dominique Ansel’s creation.  Time passed, the crowd grew friendly and we soon realized that our Cronut trip was more of an event than a chore. Than it hit me! How long was the line? How many people would wait for hours to leave the bakery empty handed and without the coveted golden Cronut box! 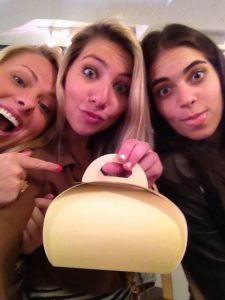 It was at that moment, after we walked the line that stretching blocks, that we realized just how desperate people were to acquire the treats. One individual brought two Cronuts from a fellow patron for $100! On an even more extreme level, one individual offered $600 for someone’s spot in line just so he could secure two Cronuts for him and his loved one! It was hard to turn down these offers, but hey, it was a work mission after all and we were way more excited than even I like to admit!

As the bakery finally opened its’ doors at 8:00AM, and the line started to inch forward, we had the overwhelming joy that we would soon be tasting the much anticipated Cronuts. One of the most rewarding moments of the morning was that we were greeted at the door, not only by the smell of delicious treats but also by Dominique Ansel himself, saying good morning to his loyal customers and even offering to take pictures! 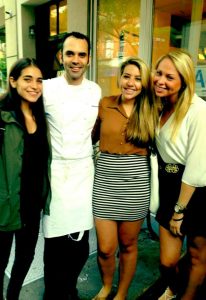 After making our purchases, and dodging envious eyes, we made our way back to the office to share our blackberry Cronuts. Was it worth the wait? ABSOLUTELY! Every bite we had of the flakey, original, and creamy Cronuts was better than the last and we found ourselves saying we would be willing to wait in that line over and over again!

Mission Cronut… Success! Return Customers? Absolutely! We can’t wait to try next month’s flavor, as it changes monthly, which the bakery announced to be coconut fig!

Check out our experience first hand by watching our Cronut video!