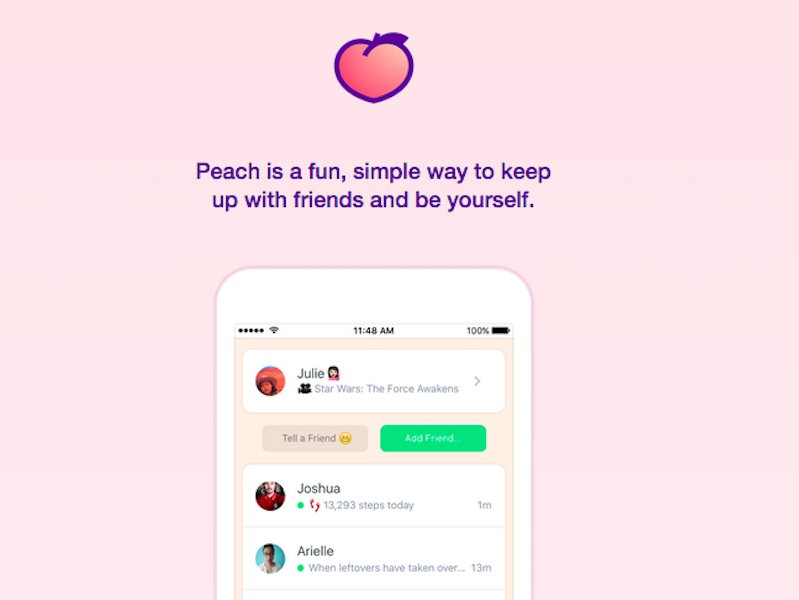 Peach, a new and free iOS social media platform, is the current talk of social media users who cultivate a social media presence to stay connected both personally and professionally.

How to Use the App
After downloading the App to your smart phone, you’ll be prompted with a step-by-step tutorial of how the app works. Once you have filled in your name and uploaded a photo, you can invite friends and begin sharing information, photos, and timely updates.

Benefits of Peach
As a product of Dom Hofmann, founder of Vine, Peach meets the demands of social media users and integrates familiar formats found through Apps like Twitter and Slack, a team communication outlet. With a continuous running main feed similar to Twitter, you are able to efficiently share current moods, GIFs, the weather, and more. Using easy shortcuts that Peach refers to as “magic words,” you are prompted with fun ways to share info and images to friends. Commonly used shortcuts include the following:
• “GIF” followed by a keyword for what the GIF should express will present various GIF options to share on your Peach
• “Draw” transforms your screen to a drawing board allowing freehand expression
• “Song” will share the current song you are listening to with an option for friends to access the song via Apple Music or Spotify

Will it last as a trendy and preferred social media platform?
With the constant development of new social media platforms, it is questionable whether Peach will maintain interest from savvy social media users. One major hindrance to the app is that it is solely available to those who are iOS users. With such a limited audience Peach could suffer from the lack of expansion and be yet another short-lived platform. Additionally, the app currently experiences some problems such as slow GIF downloads and delays in functioning. However, these issues are currently being addressed.

With Peach still a new and trending app currently working through improvements and potentially adding features such as direct messaging and allowing availability to Android users, the app has potential to keep its users and evolve.