@POTUS on Social Media: A Recap of Week One

As of 12:01 PM on January 20, Donald Trump became the President of the United States, and because this is the digital age, he also became known as @POTUS. Twitter transitioned Trump over to the presidential handle while he was being inaugurated, and archived all of Barack Obama’s tweets from his presidency, for your viewing pleasure, to @POTUS44.

Due to a glitch on Twitter’s end, this was one of the less peaceful transitions. Some followers wanted to stop getting updates from @POTUS and many unfollowed once the account was transferred, but their accounts immediately re-followed the president without their consent. This resulted in many angry comments from unhappy users. The glitch was quickly corrected, and Twitter CEO Jack Dorsey tweeted an apologetic statement.

Another social hiccup in the first week of the Trump administration surrounds The White House’s phone-in comments line. The recording system was deactivated during President Obama’s last week in office, and it appears the line was not immediately reinstated by the Trump administration. Users calling in are being redirected to a Facebook Messenger feature that does not yet actually exist on The White House’s page.

The @whitehouse Instagram handle was also transitioned this week, as content was quickly wiped from the Obama administration to create a clean slate for Trump’s content to live for the next four years. The White House released a social media transition plan in late October aiming to “preserve and pass on the digital history of the Obama administration” by archiving all images on @obamawhitehouse. Despite the public plans to archive content, many social followers took to the platform to express distaste and concern that the images were permanently removed. Even still, Instagram users continue to follow the official White House Instagram, with the account reaching 1.1 million followers this week and growing steadily. Trump’s personal Instagram account, which remains active, reached 5.2 million users.

Continuing on the theme of disappearing images, Trump took to Snapchat on the morning of his inauguration to feature video footage of his drive from the White House to the inauguration ceremony. While Obama staffers captured moments from his presidency on the @POTUS handle, Trump, still president-elect at the time, took to his own verified account. His proof of Snapchat verification? The flying money emoji. It is still unknown if Trump’s staffers will also take control of the @POTUS Snapchat handle. 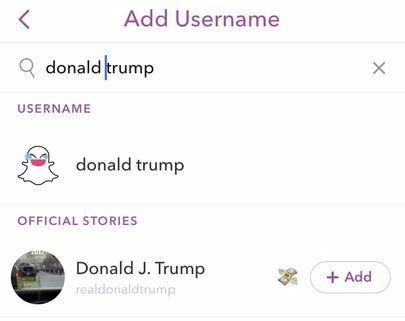 @realDonaldTrump chose to share his first thoughts as president from his personal Twitter account, and also transitioned to using @POTUS that day, posting a Facebook link to the full text of his inauguration speech as his first tweet. His personal account has been used to make comments on happenings such as the Women’s March on Washington, while the official presidential handle has kept the public updated on his first days in the White House and thanking his family for their constant support during this time.

Data Scientist from the Washington Post David Robinson used quantitative data and linguistic research with a word comparison in his effort to prove that all tweets coming from an Android device are directly from Donald Trump himself. Any tweets coming from an iPhone are speculated to be from his administration. (Wouldn’t we like to know?) Between the two accounts, he now has a follower reach of over 35.9 million users.

While Trump used his personal Twitter account during the election to promote his political interests and antagonize his opponents, most believe it was quintessential to his campaign success. The trend we’re seeing as of now is that @POTUS is constantly retweeting @realDonaldTrump, and this activity is not being reciprocated by Trump’s personal account. After winning the election, he claimed in an interview with 60 Minutes that he would be “very restrained” on Twitter once he took office. Only time will tell what the President’s future in social media will look like.

What are your thoughts on President Trump’s first week on social? Tweet us @socialfly and let us know!