Posted at 6th-Jul-2017 in Uncategorized | Leave a reply

Yesterday, Snapchat rolled out an update full of fun new features that are sure to fuel the fire in their war on Instagram and Facebook stories.

First in the lineup is the Paperclip feature. Accessed in the vertical toolkit, Paperclip allows users to insert a website link in their snap. With a simple swipe up the link can then be accessed through Snapchat’s internal browser. This feature previously existed on Snapchat but was only available to ad campaigns and Discover content. Now, Snapchat is saying, “come one come all” to gain an edge against competitors with this fan-favorite feature.

The update introduced the backdrop feature. What exactly is that? Think, GeoFilter wallpaper. Users can trace objects and people in their snap and instead of overlaying a design the way a GeoFilter would, they can place a variety of graphic images behind the object they traced.  If you are a fan of creating your social media content Snapchat’s update has another surprise up its sleeve. For a fee starting at $5.99 users can set up their own GeoFilter inside the Snapchat app using “On-Demand GeoFilters.” 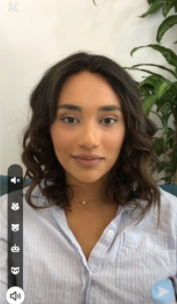 Last but not least, Snapchat introduced Voice Filters which allows users to remix their voice through the speaker. This effect is similar to your favorite facial filters, such as the huge grin with a squeaky voice. Now if users want to alter their sound they can do so without using an animated lens by just recording themselves talking, then tapping the speaker icon to preview the variety of voice alterations.

Snapchat met Instagram on the front lines fully loaded giving users an all-access pass to add links to snaps, a feature exclusive to verified accounts on Instagram Stories, along with a few other bells and whistles. Will Instagram wave their white flag or gear up with an update of their own to combat their competitor?

Let us know which feature you’re enjoying the most in the comments below!