Social Media Is Changing Beauty Standards (for the Better)

Unrealistic, skewed, detrimental – all words that are often associated with beauty stands of yesterday, today, and tomorrow. This is not news, though. What is news? The evolution of how social media is influencing these standards – for better and for worse. As a millennial who grew up idolizing false standards without an Instagram filter or hashtag in sight, I am ecstatic of the potential social media has to revolutionize the beauty game.

Back in my day (ugh), the 1% of the fashion and beauty industries – celebrities, magazine editors, and fashion designers – held the power of dictating what is considered “beautiful.” Today, social media has expanded that influence to include the voice of the masses – you, me… even that girl who was sitting next to you on the train this morning.

“Nowadays, a 14-year-old blogger can have a voice as loud as that of the CEO of a Fortune 500 company. A single tweet or blog post can go viral, provoking changes at the top in a matter of hours,” Elena Rossini told Mic. Rossini is an Italian filmmaker and director of The Illusionists, a documentary about how Western beauty ideals are permeating the rest of the world.

Dove, a brand that is known to spearhead body positivity and confidence movements for women, found in a recent survey that 25% of 1,027 women between the age of 18 and 65 reported that their conception of beauty is shaped by social media.

So what’s going on in the social media space to shape these ideas of beauty? Good and bad additions.

The negative influences we’ve become accustomed to in traditional media are still there. Photoshop rears its ‘ugly’ head, whether you see it flipping through the pages of a magazine or scrolling through your Instagram feed.

American Eagle’s Aerie lingerie brand decided to put its foot down against the Photoshopping trend and, in 2014, banned any retouching from its photos. Two years later, the brand has experienced huge revenue growth. So far in 2016, the company has seen a 32% increase in sales. Who’s to say that their anti-Photoshop stance caused this growth? Not me. But it does bode well for the direction that we’re headed in.

While social media is a constantly evolving ecosystem, these are just a few major events that will continue to propel society in the right direction in defining what beauty is. (Although I would argue there is no correct definition.)

1. Celebrities are showing us an unfiltered look into their lives.
Much to publicists’ chagrin, they don’t have the final stamp of approval of what their clients blast out to their millions of followers. Kylie Jenner, arguably the Queen of Snapchat, often snaps videos with no makeup on, showcasing pimples or blemishes. Chrissy Teigen, who has graced the cover of “Sports Illustrated: Swimsuit Edition,” posted an Instagram of her legs and their stretch marks with the caption, “Stretchies say hi!” We love you and your stretch marks, Chrissy. 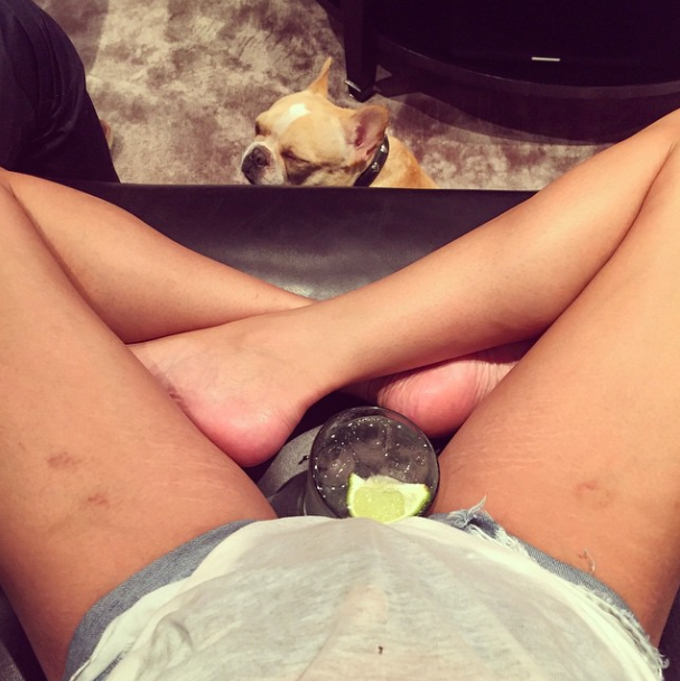 2. Strong, beautiful women have a voice and people are listening (even if they’re not leggy, blonde supermodels).
Okay, so she’s still a supermodel, but Winnie Harlow, who has surpassed 1.1 million followers on Instagram, has a skin condition called vitiligo. Harlow utilizes her social media platforms to spread messages of body positivity and highlight issues like racial inequality in the beauty industry. Gracing the covers of magazines, she has come a long way from being bullied out of high school and acts an inspiration to women all across the globe. 3. Body (and beauty) positive campaigns spread like wildfire on social media.
#EffYourBeautyStandards boasts over 1.1 million posts. Hashtags like this that promote self-love and acceptance create a community where people all over the world are contributing and chiming in. #LoveYourLines encourages people to love their stretch marks – which magazines normally blur out without a second thought.

Comments on posts with these hashtags are not always positive – there are always groups of people that can find anything to be upset by – but there is an overwhelmingly positive response from social media users around the world who work to encourage and inspire others to find confidence and self-love. So while the social media communities aren’t made up of all rainbows and butterflies, our society is certainly taking steps in the right direction.