The Real Champ of the World Cup: Social Media

As the World Cup comes to a wrap, we wait for the final winners to emerge.  However, the true champ has already spread its glory around the world.  Social media has taken over during this past World Cup; creating more buzz than the revered Super Bowl.  It’s continuously changing the way spectators watch sports and whether that’s for the better or worse is up to us to decide.

Before the first kick was even made, the World Cup began its triumph over the Internet.  In just the first week, the World Cup was spoken about more on Facebook than the Super Bowl, Sochi Olympics and the Academy Awards combined.  Social media is definitely increasing the hype around large sporting events and getting the not so athletic intrigued. Even the Twitter user with no soccer background nor any interest in the sport, is being overwhelmed with tweets and hashtags related to the games, so he or she can’t help but feel a part of the event. The use of the hashtags also can connect common fans from all corners of the world.

On the flip side, the ability for spectators to throw in their “2 cents” can have its negative affects, as well.  In the case of Luis Suarez and his little biting incident, social media definitely was not on his side. Everyone held an opinion on the matter and felt no restraint from bashing him via Twitter and Facebook. His suspension also created an uproar as his fans saw the punishment as extreme and uncalled for.  This caused worldwide arguments throughout social media over whether or not Suarez’s suspension was fair.

Social media has had its ups and downs throughout the event. However, I think we can all agree it can never hurt to see some selfies of Cristiano Ronaldo and the rest of his team. The World Cup has been the most talked about event in Facebook history and that calls for social media to be the true champ of this 2014 World Cup! 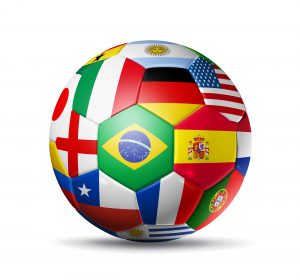