What Our Favorite Emojis Say

Posted at 7th-May-2015 in Uncategorized | Leave a reply

At Socialfly, we love a good emoji! To dive a little deeper into the true personalities of the ladies in our office, I asked everyone what their favorite emoji is, and why! 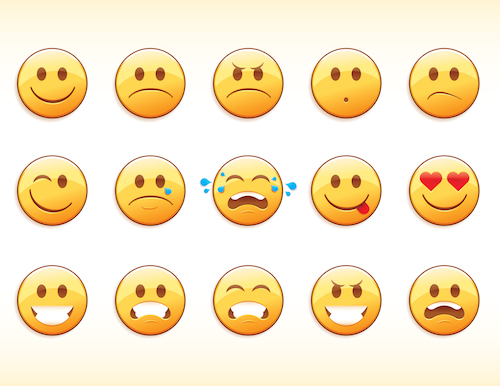 Here’s what they had to say, and a little bit about what these choices might mean about them.

Ps… did you know there is an Emojipedia?!

Stephanie Abrams, CEO
Favorite Emoji #1: Face throwing a kiss. An emoji face blowing a kiss; but officially called “Face Throwing A Kiss.” One eye is open, the other is winking. A heart is shown leaving the kissing mouth.
Favorite Emoji #2: See-No-Evil Monkey. One of the three wise monkeys, known as Mizaru. This See-No-Evil monkey has hands covering his eyes, as part of the proverb “see no evil, hear no evil, speak no evil”. Sometimes used as a playful I didn’t want to see that expression.
Why she loves them: 1 – “It’s the best one to blow a kiss!” 2 – It’s the best emoji to help her express “oh my goodness!”
What it all means: Well first of all, she couldn’t pick one, so this must mean that she is just so enthralled by emojis she could not contain herself! If you look closely at the kiss emoji you will notice it is making a face that is not possible. Winking and throwing a kiss is hard. Try it. Also, you don’t “throw” kisses as it says in the official name. You blow them. This proves that Stephanie is up for a challenge, which is one of the things that we love about her most!

Courtney Spritzer, COO
Favorite Emoji: See-No-Evil Monkey. (see above for definition)
Why she loves it: Because it accurately describes when she needs to express the following sentiment – “Oh no! Oopsie!”
What it all means: Buzzfeed tells us that this emoji preference means that Courtney is a “troublemaker — although not always intentionally.” She has “a playful, mischievous side that people can interpret as “causing drama.” But it’s not her fault that drama loves to follow her!” Hopefully she reserves the use of this emoji for special occasions only.

Mary Kate Hoban, Senior Account Manager
Favorite Emoiji: See-No-Evil Monkey. (see above for definition)
Why she loves it: “Because it often depicts how I feel. To me, this emoji says – I can’t even…but at least I’m still cute!”
What this says about her… and our office: Apparently based on the last three favorites we have a lot of troublemakers on our hands. Now we know the truth. At least Mary Kate is conscious of trying to be cute while in crisis or causing trouble! #TripleTrouble

Ariane Sloan, Director of PR
Favorite Emoji: Dancer – A person dancing. This emoji is popularly known as a woman in a red dress salsa dancing.
Why she loves it: “Because she’s fabulous, and so am I!”
What it all means: According to BuzzFeed (my ultimate source for information) this emoji pick means that Ariane is an “Independent and confident individual. There isn’t a moment that goes by when all eyes aren’t on her and her saucy outfits.” She should, “keep WERKIN’ her good side and not let the haters stop her from showing off your ankle.”
I feel this describes Ariane perfectly.

Megan Toscano, Account Manager
Favorite Emoji: The Party Popper – A colorful party popper, used to celebrate an occasion or party.
Why she loves it: “I love using it when something fantastic happens!”
What it all means: Buzzfeed was no help here, so I have to make some assumptions based on this definition and knowing Megan. I’m going to say that this favorite means that Megan loves a celebration, no matter how small. She also loves a good sparkler or item with glitter on it. Who could blame her, right?

Caroline Quigley, Account Manager
Favorite Emoji #1: Sparkles – Decorative sparkling stars, the kind that may indicate an item as being ‘sparkling clean’ (very clean) or shiny.
Why she loves it: Because “adding it to texts or emails adds a little bit of sparkle to everyone’s day!”
Favorite Emoji #2: Snail – An orange or brown snail shown with distinctive spiral shell. Oddly shown as purple in Twitter’s artwork.
Why she loves it: “Because it’s rebellious and faces the opposite direction of all other emojis.”
What it all means: Caroline also could not make up her mind. Which I understand because there are so many to choose from! Caroline is also extremely caring and sweet, so I can understand why she’d want to love all the emojis. I’ve never heard anyone say that the snail was their favorite. I did not even know there was a snail until she brought it to our attention, or that it was facing the wrong way! As for the sparkles, she is always down for sparkles or glitter, so it is no shock she chose this one!

Kaitlyn Gallagher, Account Director
Favorite Emoji #1: Clapping Hands Sign- Two hands clapping emoji, which when used multiple times appears as a round of applause.
Why She loves it: “Because there are many instances in which I can use it (happy, sarcastic, etc.)”
Favorite Emoji #2: Crystal Ball – A crystal ball, used by a clairvoyant to see information or inform a person of their future.
Why she loves it: “I don’t ever find myself using it but I think it’s so cute and I’ve been actively looking for reasons to use it anywhere I can.”
What it all means: The combination of these two shows us that Katilyn is a cheerleader for our team (fun fact- she was actually a cheerleader!) and she also has an uncanny way of sensing the future and preparing for it. A winning combination for sure – and a must-have quality at Socialfly!

Amber Sakis, Account Manager
Favorite Emoji: Weary Face – A distraught-looking Emoji with an open mouth, and crescent shaped eyes. Appears to have given up.
Why she loves it: “ Because it covers a wide range of emotions:
1. When something is so cute that you want to physically die; puppies, babies, kittens.
2. When you see an adorable couple that you aspire to model your own love life off of (see Beyonce & Jay-Z, John Legend & Crissy Tiegen, Justin Timberlake & Jessica Biel, Ben Affleck & Jennifer Garner).
3. When you have FOMO.
4. When you have reached the point of exhaustion that no longer allows words.
5. Monday.”
What it all means: Her in depth reasoning says it all. I think she had just been waiting to tell someone all of her thoughts about this emoji. It also shows that she is a lover of all cute things and pop culture references.

And last but not least… me!

Alanna Pithis, Account Director
Favorite Emoji: Face With No Good Gesture – A person with arms forming an ‘X’ to indicate ‘no’ or ‘no good’. This motion is also used on the TV game show Deal or No Deal to indicate ‘No Deal’.
Why I love it: Because sometimes you just need to say “stop” or “I can’t” with a hint of humor. ☺